A New Weather Station at the Top of British Columbia

Researchers install instruments at a high-altitude mountaineering hut to monitor changing ice and snow conditions in the province.

You wouldn’t expect to find a shelter constructed on a windswept rocky outcrop called Claw Ridge, but for 50 years an alpine hut has perched there in the shadow of Mount Waddington, the highest peak wholly in British Columbia. Now, thanks to perseverance and preparation that would make the original hut builders proud, the Plummer Hut—at an elevation of 2,680 meters—is also home to the highest weather station in the province.

New weather station installed near Mount Waddington and the Plummer Hut at 2,680 meters above sea level. Photo by Stew Butler

“When I first arrived at the hut and saw where it was, I would have never considered putting a hut in a spot like that, or a weather station for that matter,” says Bill Floyd, a research hydrologist with the Ministry of Forests, Lands, Natural Resource Operations and Rural Development, and an adjunct professor at Vancouver Island University.

The BC Mountaineering Club built Plummer Hut in 1969, the same year as the moon landing, and named it for Paul Plummer, a climber who had died the previous year. The hut’s location is no accident—the curved A-frame structure sits smack dab in the middle of the BC Central Coast’s largest icefields and within striking distance for mountaineers braving some of British Columbia’s toughest climbs.

More importantly for scientists like Floyd, melt from these mountains flows through the Klinaklini, Franklin, and Homathko watersheds into Knight and Bute Inlets and out to the Discovery Islands, home to millions of salmon and other creatures. 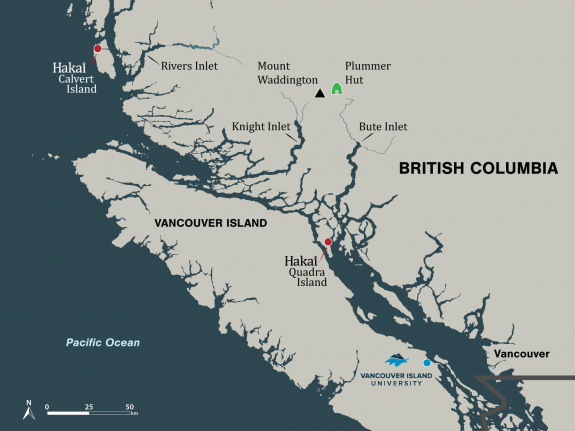 While the points where the inlets reach the coast are more than 100 kilometers from each other, “it is always notable to me that the three systems Hakai studies in detail—Bute, Knight, and Rivers—are all closely linked to the Mount Waddington plateau,” says Eric Peterson, the executive director and founder of the Hakai Institute.

To install a weather station on a remote high-elevation plateau requires a helicopter and a “Goldilocksesque” balance of the perfect conditions—not too windy or too warm and with just enough time to complete the task before a storm system rolls in.

To hatch a detailed plan, Floyd first needed to get a firsthand look at the site, which proved easier said than done. Floyd’s colleague Brian Menounos, a professor at the University of Northern British Columbia (UNBC), initially proposed putting a weather station there three years ago, but the team was thwarted multiple times by inclement weather.

Finally in late summer of 2019, conditions were just right. Floyd found a two-hour weather window and flew up to the hut to scout and map logistics. Then, he and his team went to work, meticulously working out the details.

“We spent two months planning for the install, designing and building a custom stainless steel tower, and prepping material,” Floyd says. “Ninety-five percent of the work is done before we actually do the install. Forgetting even one bolt or handful of nuts can halt a project.”

When Floyd and colleague Stew Butler landed at Plummer Hut, there was 40 centimeters of fresh snow and the tower site was buried. After 15 minutes of probing, they found the spot, which was mercifully unfrozen. As dusk approached and temperatures plummeted, Floyd and Butler finished pouring concrete and covered it with multiple layers of insulation to keep the heat in. 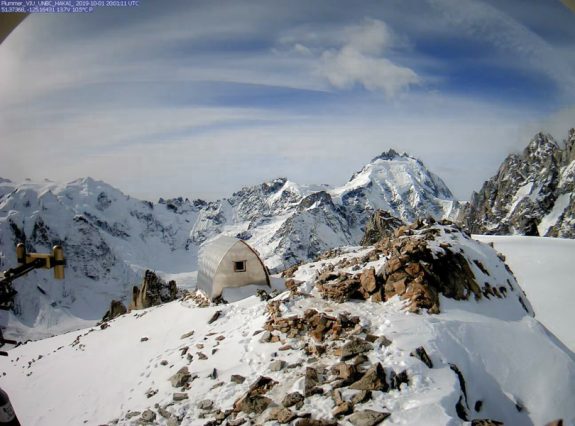 Webcam view from the new weather station near the Plummer Hut. Daily images from the station are published online.

“I worried about the concrete setting, hoping that we hadn’t wasted all that time and effort to get a frozen clump of mud,” Floyd says.

Two days later, Floyd and Butler returned with colleagues Alex Cebulski and Alison Bishop, the latter in her third week on the job. They spent every available minute installing and testing the weather station equipment. As part of a network of sensors throughout BC’s coastal mountains, the station provides a suite of climate information to researchers interested in how the snowpack, ice, and meltwater are changing as the climate warms.

These meteorological data will also be invaluable to interpret an ice core that Menounos and colleagues hope to get at nearby Combatant Col. This ice core, along with those previously collected, provide a way to reconstruct annual precipitation and forest fires for the last several hundred years.

The efforts are part of the broader Hakai Cryosphere Node, which is a joint effort of the Hakai Institute, UNBC, Ministry of Forests, Lands, Natural Resource Operations and Rural Development, and Vancouver Island University. Bella Coola Helisports provided further support for the weather station network.

“The site will also help bring attention to snow and ice in an area of BC few people think about, let alone get to visit,” Floyd says.