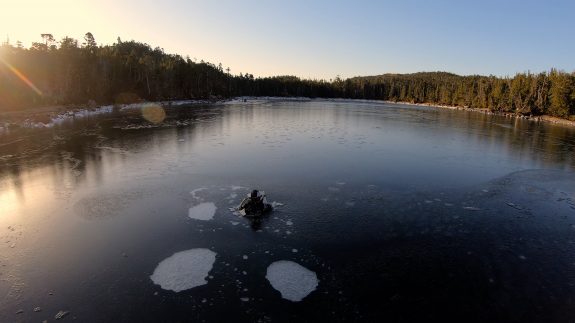 Hakai diver Derek Van Maanen emerges through a thin layer of sea ice in Pruth Bay, British Columbia. The white patches are where his bubbles got trapped under the ice. Photo by Zach Monteith

As flowers poked up from the ground in Vancouver, it was easy to smugly tease those stuck in the polar vortex out east. Then a winter blast hit the BC coast. But not even winter’s karmic retribution could slow down Hakai researchers.

On the BC Central Coast, two Hakai divers geared up as the eight-meter R/V Good Hope crunched its way through a centimeter-thick skin of sea ice that had formed overnight on Pruth Bay. While far from ideal, the divers took stock of the situation before deciding it was safe to take the plunge.

“We rolled in back first like usual,” says Hakai diver Derek Van Maanen. “It was weird. Like the most subtle pause as you slow down mid-fall and break through the ice.”

Derek and the crew are used to diving in water temperatures between 7 and 11 °C. Nothing a drysuit and a few fleecy layers can’t handle. But on the day before Valentine’s Day, Pruth Bay was a teeth-chattering 3 °C. 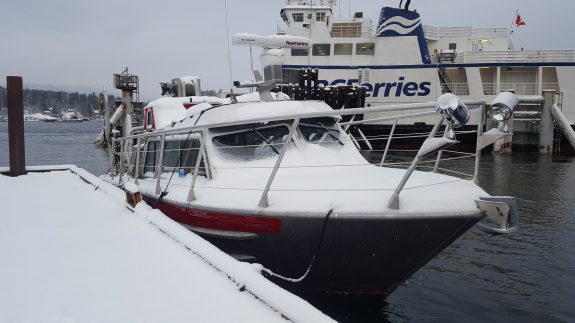 The R/V Hakai Express needs a shovel before its oceanography mission. Photo by Emma Myers

“We were freezing down there,” says Van Maanen. “You definitely feel the difference. It stings the face, sends shudders through the body. Then your hands stop working.”

Meanwhile on Quadra Island, 250 kilometers southeast of Pruth Bay, Hakai’s oceanography team scraped snow and ice off the bow of the R/V Hakai Express. While they didn’t encounter any sea ice, air temperatures were far from warm.

“It was a good thing we didn’t need the wash-down hose for the zooplankton nets today,” says Hakai oceanographer Katie Pocock. “It was frozen.”

There’s no reprieve in sight, as the coastal cold stretch is forecast to continue for at least another week. No matter the conditions, the hardened Hakai team will be ready.

“We were pretty cold,” says Pocock. “But I think the divers win.”