The Great Walls of Quadra

Mapping Quadra Island’s monumental clam gardens, which line over one-third of the coastline.

Few boaters drifting through the bays of northern Quadra Island will ever notice them. But once a keen-eyed person points out these coastal features, they are unmistakable—as the tide recedes, kilometer after kilometer of rock walls appear.

Archaeologists have been coming to Quadra Island for years to study these walls. In May, the Hakai Institute used drones to help researchers map out these often-underappreciated structures and get a sense of their full extent.

The rock walls are part of an extensive network of clam gardens built by the area’s First Nations over thousands of years. In this area, many of the walls were built off sheer cliff shorelines to create productive areas for clams to live where few would have lived before.

The wall’s stacked stones range from the size of a baseball to larger than a basketball and help extend the beach habitat by trapping the muddy sediment where clams settle and grow. The gardens help boost how much food the land can produce by doubling the amount of clam habitat, while also providing optimal tide conditions for clam growth.

The main study site on Quadra Island consists of two bays with forty-two kilometers of shoreline. By stitching together hundreds of aerial photos taken from drones, in addition to extensive fieldwork, we recorded over fifteen kilometers of constructed rock walls still visible at low tide—an astounding thirty-six percent of the shoreline.

More walls are likely no longer visible after being buried in silt, or destroyed by storms, tectonic activity, or historic logging practices. Many clues in the clam gardens themselves detail what the people ate, how many people could be sustained in the area, and the dates for clam garden construction and abandonment.

To allow us to map all of the clam gardens, we conducted nine flights with small drones, or UAVs (unmanned aerial vehicles), over two low tide cycles. On these flights, we captured over 3,000 images to stitch together a clear view of the entire shoreline in both bays.

We analyzed nearly eleven square kilometers of UAV imagery with geographic information systems (GIS) to map out the fifteen kilometers of rock walls. An added benefit of the UAV imagery is we are also able to simultaneously gather high-resolution estimates of ground elevation profiles and contours. Now, the clam gardens can be reconstructed in the lab with a click of a button. No mud required.

Explore a clam garden site up close by clicking on this map: 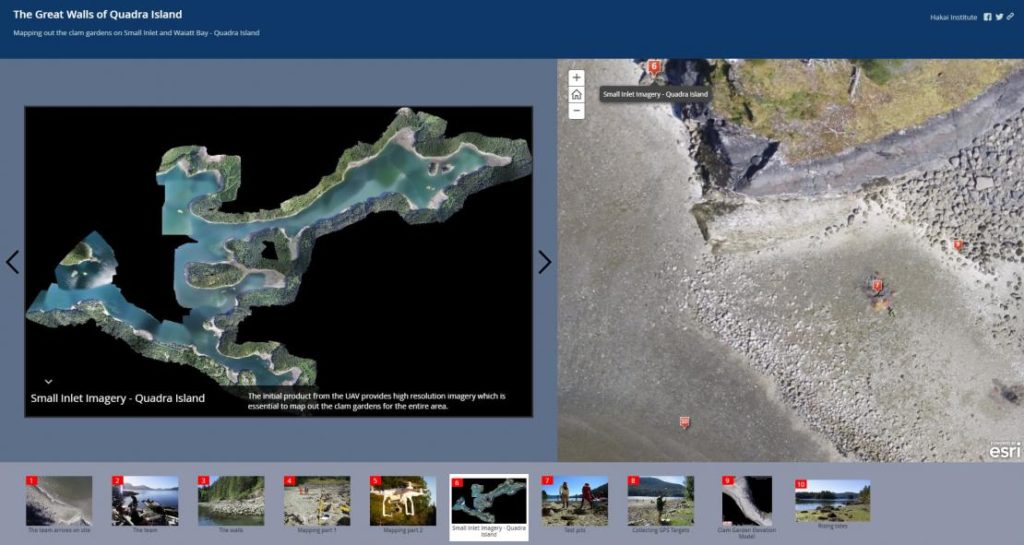